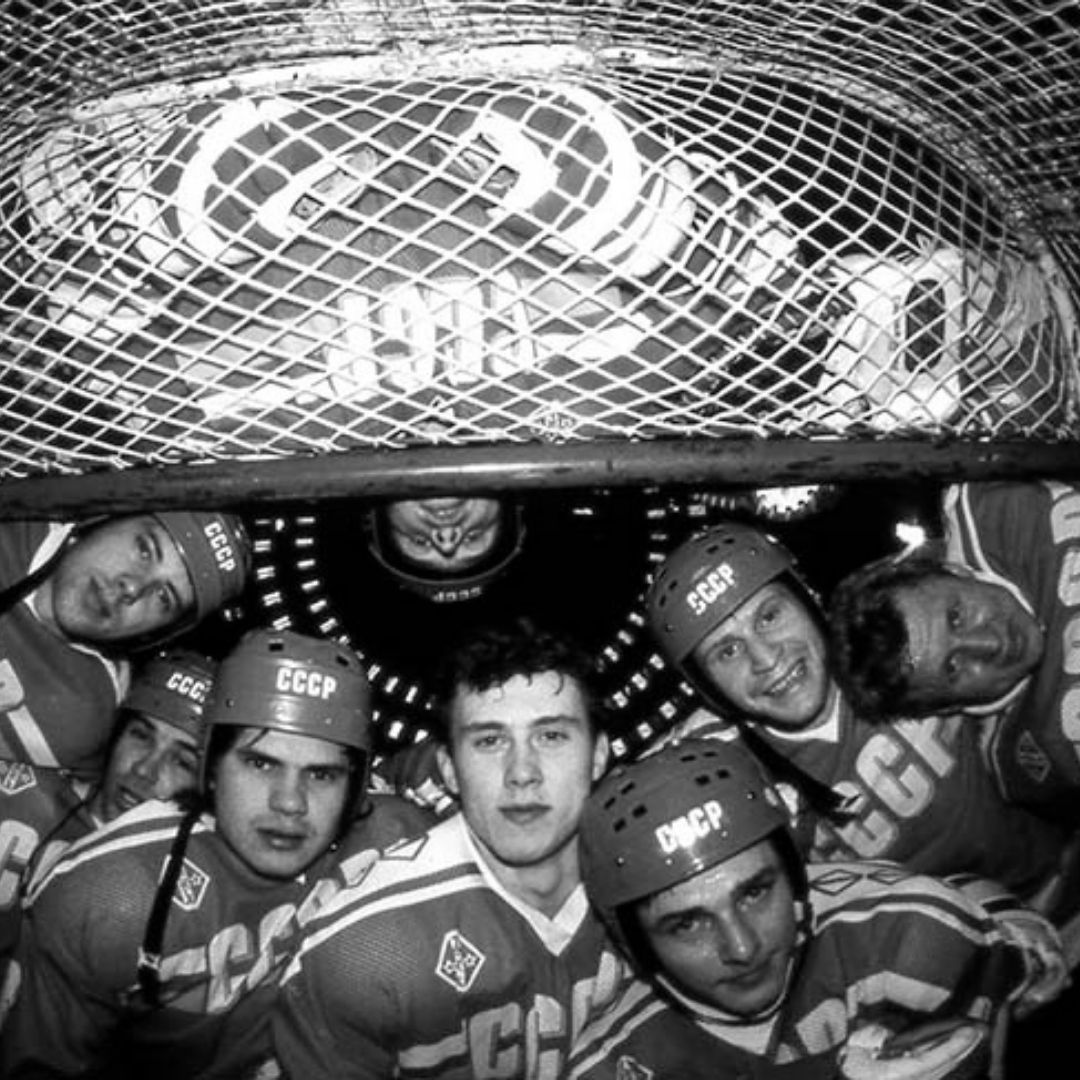 The picture you are looking at should not have been taken.

Most of the hockey teams are used to pray before the game, bending together by the gates. My idea was to take a picture of the Soviet hockey players while they were praying before the game. It was almost impossible. During one of the games, the gate to the ice rink was closing, and I started to beg the USSR national team coach Tikhonov to let me on the ice and take a picture. He said I could take this picture during practice before the game - which I did, but the result was not impressive. You could say that players were posing for the picture.

I have not given up. Somehow I got on the plane with the USSR national team, who were heading to Switzerland for the world championship. I would literally not leave Tikhonov alone. The championship itself did not interest me. I just wanted to take the cherished picture from inside the hockey gates. When Tikhonov understood that I would not let him go, he said that I could take my picture if they were winning the game tomorrow. He also said that I shouldn't ask how much effort it cost for him to make the arrangement.

With the applauding of other photographers and even the spectators, I left the hockey gates. Everyone knew that the picture I took was unreal. I've been offered big money for this picture, but, being a patriot to the magazine where I worked "Olympic panorama", I jumped onto the last flight to Moscow to give the picture to print. That's when something unexpected happened.

How do you think this story ended?


...the rest of the story was not very bright

Soon after the photoshoot inside the gates, we got the message that one of the hockey players - Alexander Mogilny, stayed in Sweden and didn't go back to the USSR. It was a huge scandal. A chief editor of our magazine was fired. And, probably because of this stressful situation, he died in a car crash.

The picture of the hockey team was printed big in the magazine. Alexander Mogilny, knowing that he was going to stay in Sweden, took his helmet off for the picture. He was quite recognizable there.

On that day in Sweden, I promised the team members that I would bring them copies of the magazine. So, when I was about to keep the promise, the worst started. The hockey bosses were in the hockey locker room, and when I brought in the copies of the magazine, they started yelling at Tikhonov for that Mogilev situation. I gave the magazine and quietly left the room…

A start to this whole story, though, was put after the picture that you can see above. This picture was taken by me from the rooftop of the Luzhniki arena in the 70s. This very picture won an award at Holland's world exhibition, that made me imagine if it is possible to take a shot from inside the gate…